An Eclipse: Fun For Humans, Not So Fun For Werewolves 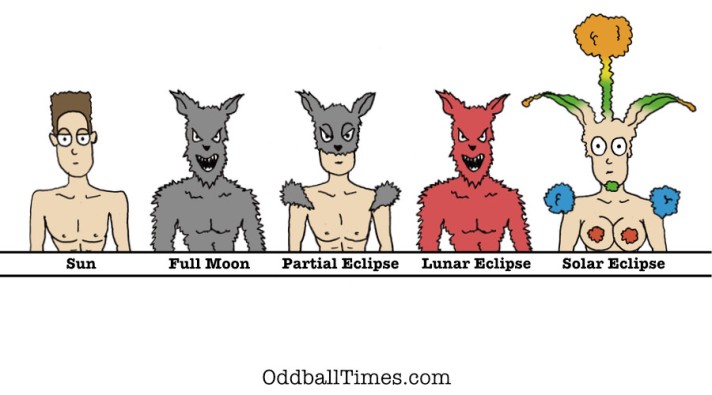 An eclipse, like the one occurring today, always draws in large crowds. People seem to marvel at the rare sight of the sun being obscured by the moon or the moon moving behind the earth’s shadow.

But, when you’re gazing at this natural wonder today, spare a thought for all the lycanthropes out there. Since their appearance is controlled by the moon, during an eclipse they are mutated temporarily into a disfiguring yet rarely seen state.

If you don’t already know, during a partial eclipse, a werewolf is a very embarrassing sight; not quite scary enough to be considered a werewolf, and not quite unassuming to be considered a human. During a lunar eclipse, when the moon has a reddish tinge, every werewolf turns red which can make any anti-communist sentiment all the more problematic. And let’s not forget that under the power of a total solar eclipse, a strange thing happens to all werewolves – they grow tufts of hair and other appendages – werewolves during an eclipse of the sun look very peculiar indeed.

All this of course is not public knowledge, so for your reference, all the phases of the werewolf are laid out in the anatomically accurate illustration above, so you’ll now know what to look out for.

So, every time there’s an eclipse, instead of gawking through weird-looking solar glasses, always pause and remember those who suffer greatly during this visual spectacle. Our thoughts and prayers are with all the lycanthropes out there, the ignored victims of the eclipse. In solidarity, we’re all wolves today.