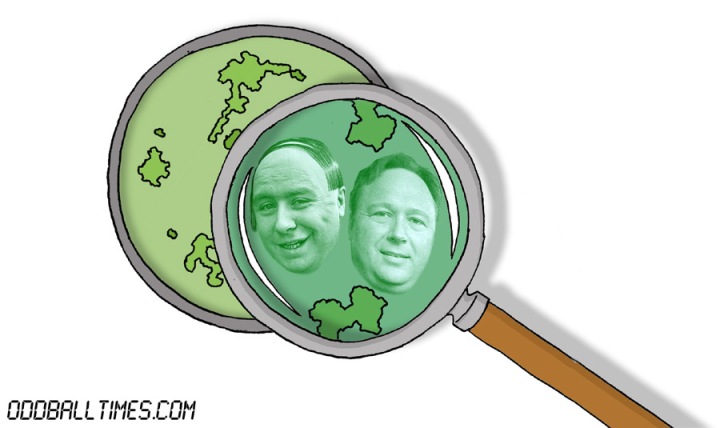 A brand new conspiracy for all you Oddball readers out there is that Alex Jones, the far-right Info Wars host is in fact a clone of The Baldy Man. Now in order to believe this conspiracy theory, you must first ignore that the Baldy Man is a fictional character played by comedian Gregor Fisher, but if you’re a fan of Alex Jones, you’ll be no stranger to ignoring facts.

Over the years, Alex Jones has changed considerably. Only last decade was he denouncing both sides of the government, and yet today he’s a supporter of the worst president the U.S. has ever seen! Jones has also physically transformed, he is now chubbier, uglier, older, wrinklier, and uglier. His weight gain could of course be due to eating all those tubs of survival food he sells in his Info Wars Store, but what about the rest of his physiognomy?

If you look carefully at Alex’ facial features, you will see glimpses of The Baldy Man everywhere; from his beady eyes to his large, egg-shaped head. Surely the only explanation for these similarities is that he is a clone of the 80s character? Maybe that’s why Info Wars is about as believable as Naked Video, maybe it’s a comedy show, and maybe that’s why people are calling Alex Jones a big joke.

Be sure to check back for more Celebrity Clone Lab news!